In order to do my Chinese to English technical translation job and ensure that I'm ready for anything, I decided a while ago to keep two identical laptops. I figure that if one laptop goes wrong the other can be used right away. Seems like a good idea? Here's what happened. 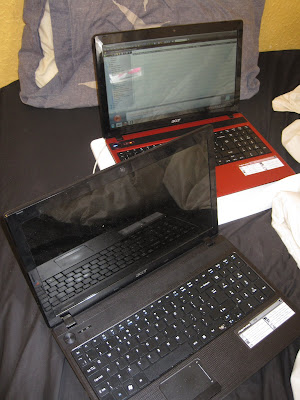 Two identical Acer Aspire laptops
The day I purchased my second Acer Aspire 4752 two things happened. Firstly I noticed that the new laptop only had the Intel i3 Core chip while my original one (black in the picture above) had the i5. They cost the same amount and came from the same store (Dixons in Ealing, West London), but I guess I should have checked that beforehand. Other than that they seemed identical so I was happy to let it go. The i3 was to be my backup machine anyway.

While I was turning on the new machine for its first use, I plugged my old computer into my TV to watch a TV show while I was waiting (new series of True Blood - crap by the way). Suddently my computer went BANG and turned off. I waited a couple of days and then turned it back on. It kept dying midway through the bootup.

So now I've got a dead "old" laptop. And a "new" laptop which I've more or less made usable from my external hard drive backup, I lost about a days work in the process. I also had to purchase a new SDL Trados license to use the second machine (I'll write about that in more detail at some point) because it wasn't letting me install it on another machine. 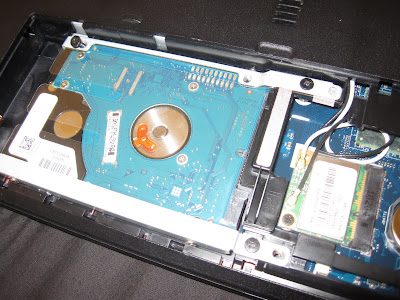 My old laptop opened up with the hard drive showing

Next step was take out the hard drive (which takes a bit of skill) and then plug it into my external case, which is USB powered. The idea being that it then becomes an external drive and I can copy all my data from that. (Although I do keep backups, they are not totally all-inclusive and I wanted to save as much data as possible - a lesson there perhaps). 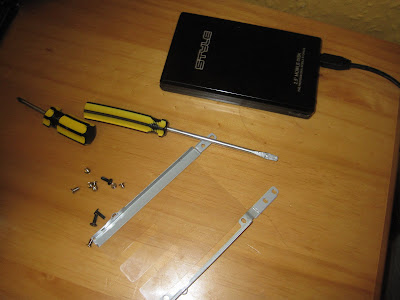 The hard drive removed and in an external casing

After a bit of messing about I was able to copy all the data from that drive (my old computer) and so I didn't lose any data. I did lose a lot of time with all the messing around and trying to figure out what I'm doing. Now I know you're going to say I'm mad, but I swear I looked and looked, and there were some screws left over after I put the hard drive back in the "old" (broken) laptop. 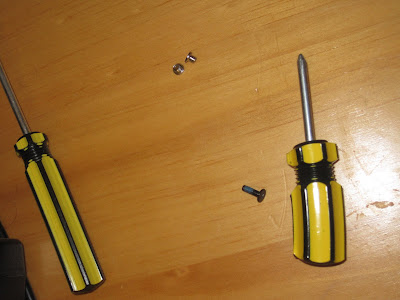 Screws left over after putting everything back together!
So now the memory from the broken laptop is restored I decided to restore the factory settings. That's what I do and it works for a couple of days before breaking again. Then I tried another factory reset and it kept getting stuck. 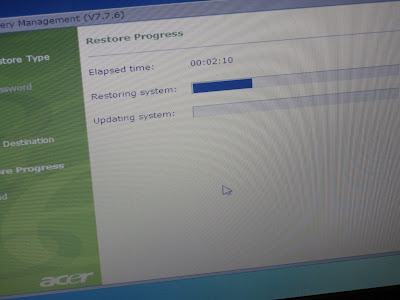 The old laptop was still only a six months old so I phoned Dixon's support. After some messing around I was put through to a company called Know How, the lady on the phone tried to get me to run a system restore, but I kept explaining that it was definately a hardware error. She agreed that they would come and collect the laptop from my home, repair it and then return it.

They took the laptop and agree to return it a week later. Close to the return date, I got a job overseas so I had to go away for 2 weeks. I phoned Know How and told them to delay the delivery until I got back. After that I got 17 calls from them ranging from "Yeah Mr David, I'm outside your house with your new laptop as agreed", to "you missed the agreed delivery today, when will you be available? I'll rearrange for tomorrow".

Eventually I got back home and got the laptop back in working order. A bit of a long story, but I thought it might be interesting. My main lessons from the experience were:

1. Always keep receipts (otherwise returning goods is a nightmare)
2. Backup everything (not just urgent or important, but everything). Also keep disks for ALL programs installed on the computer.
3. I'm not really happy with Acer. Both laptops seem a bit buggy to use, and a laptop shouldn't die within 6 months like that. In future I'll pay a bit more for an IBM or Lenovo which I hear have better keyboards anyway.
4. Keeping the two identical laptops is difficult (have to install everything on two machines/possible license issues/bugs need to be fixed twice). It might be better to think about a network of somekind?

What do you guys do for backups? Can you recommend any good solutions? I hate having to double my effort running installers etc just for the 1% chance that something might go wrong. Is there any other way???
Posted by David Smith at 09:41

David Smith
I'm a qualifed and experienced Chinese to English technical translator. I've been doing translation for a few years, and I've created this blog to share my thoughts on the subject. I'm not an expert by any means but I do hold a Masters Degree in Scientific Technical and Medical Translation from Imperial College London, along with my Civil Engineering and Chinese postgraduate qualifications, and Astrophysics Bachelors Degree. Feedback, comments, suggestions, corrections, criticism and anything else are always very welcome.