After writing this original article, I got some feedback. It seems the instructions I refer to are for upgrading from MT 2007 to 2009. They came up on my page when I downloaded the Muliterm upgrade, and I just assumed they were for upgrading to SP3 as opposed to other stuff. It does say things like "This guide provides instructions for installing and configuring SDL MultiTerm 2009 SP3". Anyway bear that in mind when you read this, and read through the comments at the end.


So recently, I upgraded my Trados Studio software up to Service Pack 3.

When I upgrade my other software (like Windows 7 for example), here's what happen. I see a little thing saying "upgrade available" and click "download", or in some cases I open a file (like with Adobe Acrobat), and it gives me a message saying "upgraded".

First you have to log onto their little website database and download the BIG .exe files.
I can't even bring myself to describe the entire process, but this will give you an idea of the quality of this wonderful 600POUNDS! software.

Then you click to download the "instructions for upgrade"
You then get a .zip file (it's big enough to need zipping you see!) containing the large pdf with all the information on how to upgrade your Trados Multiterm!
The document is "37" pages.
I'll say that again.

The help document that we are supposed to read to learn how to upgrade our Trados Multiterm is 37 pages. Thirty seven! That's more pages than a lot of people translate in a month!.

So this fun and action packed document was obviously skillfully written with the user in mind. You always know that an upgrade instructions document is useful when it contains an index and contents page, and when the "about this guide" section is two pages.

It takes two pages to describe the guide to upgrade the software!

Thanks for the extra work required to learn about how to upgrade the software I purchased expensively. I really appreciate that, because I wasn't busy working for my clients, improving my ability to work as a technical translator, or spending time with friends and family. This upgrade has made my life better.
Posted by David Smith at 18:44 4 comments:

So I've just come across this rather old article

It gives a breakdown of the costs of translating patents, and some of the suggested solutions. It doesn't cover Chinese to English, as it focuses on the big three of English, French and German, but it's interesting.

I certainly think that patent costs are totally excessive at the moment, costing up to 20k GBP for a single European patent. That amount would certainly discourage me from paying a patent. But...

Here's where I start to smell a rat. If you look at any area of industry, one of the most understood things is that its efficient to have those who pay more, pay more and those who can't pay more, pay less. That's why we have DVD regions, an Asian consumer might not be able to pay 20GBP for a DVD, while it's only a couple of hours pay in the UK, so the Asian DVDs are sold cheaper, and the regions are put on them to stop the Asian DVD's getting sold in the UK, forcing us to pay the higher amount.

The same principle applies for first class travel. The extra costs of the leg room etc, are really not that great, and the main thing first class does, is to ensure that people who can easily pay 2k for flight to New York do so, leaving the rest of us to pay somewhat less.

So why is there no discussion of this in the patent arena. With large companies (APPLE for example) paying maybe 100k for their patents, which usually bring them hundreds of millions in profits, and smaller and medium companies paying less.

Of course that will never happen because the large companies have too much control over everything. Still... we can but hope
Posted by David Smith at 08:37 11 comments:

Updating a TM in Trados Studio

So I've finally had a bit of quiet time over the holiday, and I've used it to go through my TMs (translation memories - used for computer aided translations) with my Trados Studio 2009.

It's straighforward enough, but there are a couple of points worth mentioning. So I thought I'd write a quick description of the process. It's something that a good technical translator will need to do from time to time. I aim to go through most of my TMs at least once or twice per year and tidy them up. 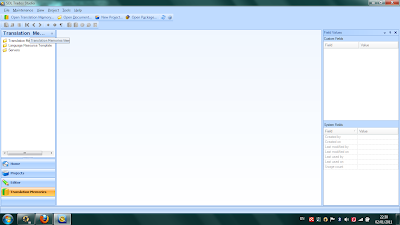 Here come the two parts that I found a little counter-intuitive. 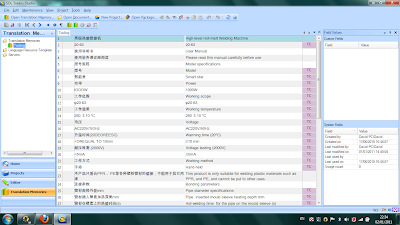 The first point to mention is that as I was looking through my TMs I kept thinking "why are all my TMs only 50 rows big". I was starting to think I'd accidently opened them in some strange preview mode or something, and then I noticed the little blue arrows at the top under the "Open Translation Memory" button. Clicking that arrow moves to the next 50 rows, and so on. Once you've moved past the first page, the "back" arrow activates, and you can navigate backwards and forwards through the records that way.

The second little point is that when you modify a record nothing seems to happen at first, but after you make the first edit. The little "save" icon on the top left under the "Open Translation Memory" button activates, and clicking that will save the current modifications.

Finally, a useful features is the Batch Edit feature, up on the top right hand side of the same bar. It allows you to do some things which might be helpful for a Chinese to English technical translator. For instance you can change all the Chinese commas into English commas, or vice versa, which could help ensure the maximum number of 100% matches. You could also put full stops after all the records or anything like that.

Anyway, just some very superficial observations, but they might come in handy if you're trying to learn the new software. Have a wonderful x-mas.

David Smith
I'm a qualifed and experienced Chinese to English technical translator. I've been doing translation for a few years, and I've created this blog to share my thoughts on the subject. I'm not an expert by any means but I do hold a Masters Degree in Scientific Technical and Medical Translation from Imperial College London, along with my Civil Engineering and Chinese postgraduate qualifications, and Astrophysics Bachelors Degree. Feedback, comments, suggestions, corrections, criticism and anything else are always very welcome.